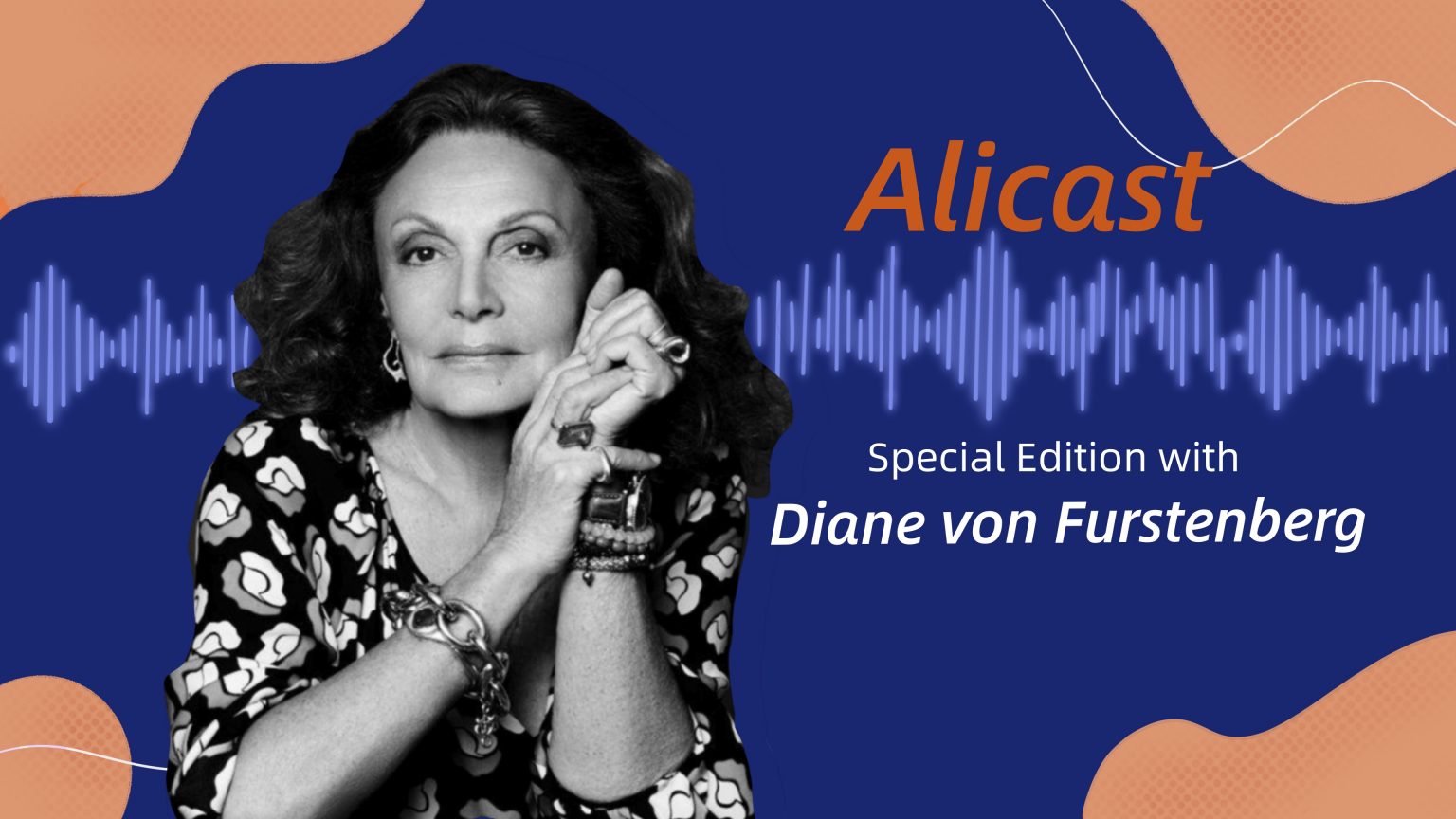 Alicast: How Covid Led Diane von Furstenberg to a Brand Reboot in China

Covid-19 has cratered the fashion industry as companies around the globe struggle with store closures and supply-chain disruptions. E-commerce and online technologies not only became immediate lifelines to help some businesses stay afloat, but also helped to accelerate their digital transformation. Among those brands was luxury fashion label Diane von Furstenberg, which has made a stronger digital pivot during the pandemic with initiatives such as fundraising and engaging Chinese consumers via Alibaba Group’s livestreaming tool Taobao Live and becoming one of the first brands to move its fashion show online at Shanghai Fashion Week.

In this special edition of Alicast, we’re joined by the brand’s founder and one of the most iconic designers in American fashion, Diane von Furstenberg, to talk about how Covid-19 has allowed the designer to “reset” and reevaluate her business, her outlook on the China market as well as the role of innovation that has remained at the core of everything she does since pioneering the wrap dress almost 50 years ago.

Below is the transcript from our conversation, which has been lightly edited for clarity. This podcast interview was recorded about two months in advance of publication.

Christine Chou: Diane, it’s such a pleasure to have you on Alicast. You’re a designer, a leader and a pioneer in every sense of the word. I’m curious: When did you first learn of Alibaba? What was your impression?

Diane von Furstenberg: When you are little girl growing up in Europe, Alibaba is one of the most famous fairytales. The first time I heard Alibaba being this great, giant, digital retailer in China, I thought – oh, what a wonderful name that they picked for it because it is the symbol of a grotto where you find everything.

Christine Chou: It’s really a unique moment, not only for the fashion industry but also for industries around the world grappling with disruptions and an uncertain future because of the coronavirus. How are you spending your time in lockdown?

Diane von Furstenberg: To be forced into confinement and to be forced into solitude forces us, both personally and business-wise, to look at all of the things that have changed, to look at the things that matter the most, to make decisions and to use of this very unusual and – hopefully – unique moment in history in the world to reset. I’m very much at a time where I am resetting my business – also because in the last 10, 15 years, there has been a digital revolution. And the digital revolution is changing everything.

Christine Chou: I’m really curious about your business. You were one of the first Western luxury brands to go to China. Can you tell us about your vision for China, and why it was so important for you to enter it?

Diane von Furstenberg: Yes, you have to understand that I was born in Europe. I was born in Belgium, and I was raised in Europe. I only came to America when I was 22, so my education is completely European, and I am European. As a result, China was looked upon as a cradle for civilization. The first time I went to China I think was in 1989. I went to Beijing – and it was very different Beijing, there were no cars – but I’ve always loved it. I did not want to go into the Chinese market just to take advantage of China. For me, it was a cultural exchange and full of admiration and respect. In 2011, I gave a big ball in Shanghai and put on an exhibition in Beijing about the story of my dress and the story of my whole life. Both of my books have been translated in China. And I’ve spent a lot of time in China, talking to Chinese women. I relate so much with Chinese women because they are very strong. And I love that strength, so I relate very much to them and, clearly, they relate to me because now I have a nice, successful business in China – about 36 very nice stores in China – and now we’re beginning to sell on Tmall. I have a great love, respect and admiration for China.

Christine Chou: When you look at China today, what do you think is the biggest misconception brands or designers have when they’re dealing with or expanding in China?

Diane von Furstenberg: Well, I hate people who look at the China market and just think about taking advantage of it. I try to do the absolute opposite. I try to talk to the individual women. That’s why my books were translated. That’s why I’ve spoken to universities. Every time I go to China, I speak to a lot of women because that is what matters.

Christine Chou: Are there any interesting retail developments that you’re following, especially innovations that combine the physical and digital in China – online and offline.

Diane von Furstenberg: I am very interested in the digital. I don’t know about China, but in the Western world, magazines have lost a lot of their authority and influence. And I think that, therefore, brands have to have an editorial point of view. Brands have to speak for themselves. What I like about digital retailing is that you could tell a story, talk to your consumer and really show it. But I think that it’s also nice to be able to go to a place, especially if your brand has a spirit. If your brand has spirit, what you do eventually is you create a community: You create a community of women in charge.

So I think it’s very important – when you make a community of women – that we all feel the same because once we commit to ourselves, and once we feel in charge as individuals, then we can use our voice, experience, knowledge and connections to help other women to be in charge and be the women they want to be. That’s how you create a community. Once you create a community, then you have power.

Christine Chou: With the coronavirus, do you foresee any changes happening in the fashion industry or shifts in consumer behavior?

Diane von Furstenberg: I don’t know. I think a lot of people, a lot of companies are not going to survive the same way. I think that there’s going to be so many changes in so many ways that, of course, fashion will be affected. How? We don’t know. People might work from home more, and that may change what you wear. But I think for a brand like DVF that’s utilitarian, but at the same time it’s to be beautiful and elegant but also about being able to be flexible. I know that in my archives, anything could be worn today. You can wear my clothes down or wear up, you can wear them at home, you can wear pull-on pants with a beautiful top. It’s about the life. I always care more about the woman than I care about the fashion.

Christine Chou: We’ve been talking to a lot of brands as well and seeing how they’re weathering this crisis. A lot of brands have said that the crisis accelerated innovation. More brands are using technologies and becoming more open to it, like online technologies.

Diane von Furstenberg: Yes. One of the things that I’m working on is on-demand, especially with the wrap, so with technology, you’ll be able to choose your own wrap, choose your own prints, mix and match and all of that.

Christine Chou: Are you also using technology in stores as well?

Diane von Furstenberg: Yes, it’s an integration. Today, it’s about mixing fashion, entertainment technology and e-commerce. The stores are important, too, because the stores are your community. It’s where you create events, where people can meet and come and do things.

Christine Chou: There’s a lot of experimentation going on. Having presence in China, you’ve seen how China has reopened and recovered. Do you think Western brands have anything to learn from China and its experience?

Diane von Furstenberg: I think the world has a lot to learn from China.

Christine Chou: When Wuhan was first hit by the coronavirus, DVF really stood out as one of the first international fashion brands to organize a fundraising campaign that was livestreamed on Alibaba’s e-commerce platforms. You, yourself, even made an appearance from your New York headquarters. What was the experience like for you?

Diane von Furstenberg: It was a wonderful moment. I should not take all of the credit – Gabby Hirata, who works for me, it was her idea. And we assembled a few women – Chinese and Americans – we were having drinks and cocktails at my studio, and we talked. We talked about hard times, and we talked about how we survived. And I don’t know, all of a sudden, it was like a therapy session. Everybody felt so seriously and with so much power and intimacy, it ended up being just a lovely conversation. And it was very real. It wasn’t fake. It wasn’t planned. It was real. And because it was real, I think a lot of people watching [the livestream] felt the same thing as we felt when we were doing it and experiencing it. There was a lot of authenticity. In the end, I think authenticity and honesty matter.

Christine Chou: I think that really showed through because I watched the livestream myself. I know people who’ve watched it from China and cried. They teared up watching the livestream. It was actually the first time I saw you on livestream. As you know, livestream has become popular – if not an essential – way of communicating directly with consumers in China and now, increasingly, around the world, so just wanted to hear your thoughts about the tool.

Diane von Furstenberg: I love it. Now that I’m in confinement, for example, I’ve done podcasts that people can listen to on Spotify. I’ve also done conversations online, on Zoom, with interesting people like Gloria Steinem. And people love it. What I think is so interesting is that you have no makeup, no hair, no lights – nothing. It’s really very natural. I guess the authenticity of it all is very compelling.

Christine Chou: You’ve been a big supporter of innovation, technology and fashion. And we’ve recently seen you making bold moves, like livestreaming your show on Shanghai Fashion Week. How has DVF continued to adopt digital technologies to be a first-mover in this space?

Diane von Furstenberg: Even though I’m an older woman, I love to look ahead. It’s just part of who I am. I’m very curious. And I’m fascinated, and I love communication. I love discovering. I love exchanging ideas and exchanging opinions and sharing.

Christine Chou: How important is innovation for DVF the brand?

Diane von Furstenberg: It’s completely important. I mean, it’s everything, it’s absolutely everything. As we speak, I am planning all kinds of very innovative things for next year. It’s a conversion between entertainment, technology, fashion and e-commerce. So I guess we will be talking more, and I want to be more and more involved. Alibaba has their office right next to me in New York so we could actually go from window-to-window. I’m fascinated. I think it’s amazing, and I hope we can do this over and over again.

Christine Chou: Has partnering with Alibaba or Tmall helped power your digital transformation?

Diane von Furstenberg: Yes, of course. And this is only the beginning.

Christine Chou: I hope we can definitely catch up with you another time in the future. Hopefully in Hangzhou. I want to thank you again for joining us on Alicast.